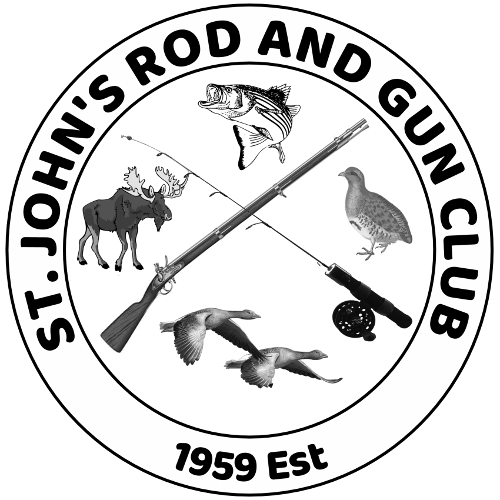 Sporting Clays is another great clay target shooting discipline at the St. John’s Rod and Gun Club.  Often described as "golf with a shotgun", a typical course includes 5-15 different shooting stations laid out over natural terrain. Sporting Clays events run from May through September on Wednesday evenings and October through April on Wednday afternoons. Please check the club calendar and announcements page for more details. Shooters must provide their own shotgun and ammunition (shot size 7.5 or smaller) while the club provides clay targets at a fixed cost to shooters.

In addition to our regular weekly Sporting Clays events, the SJRGC also provides three of our heavy duty Mechanical Throwers to club members to use on their own at Four separate locations along the sporting clays course throughout the week. When using the mechanical throwers shooters must provide their own clay targets in addition to their shotgun and ammunition.

Unlike trap and skeet, which are games of repeatable target presentations, sporting clays simulates the unpredictability of game hunting, offering a great variety of trajectories, angles, speeds, elevations, distances, and target sizes.

At the club, we use a variety of clay targets representing challenging presentations from a running rabbit, flushing double birds (Partridge hunters will love this one), to a teal. A typical sporting clay and five stand targets have: a rabbit, chandelle, overhead, standard skeet high house and low house shots, teal (launched straight up into the air), trap (straight ahead from ground level), and an incoming bird.

The sporting clays committee also developed a Five Stand setup used primarily over the Fall and Winter weekly events. Five Stand is a variant of sporting clays, trap and skeet. There are five stations with six to eighteen strategically placed clay target throwers (called traps). Shooters shoot in turn at various combinations of clay birds. Each station will have a menu card that lets the shooter know the sequence of clay birds they will shoot at (i.e. which trap the clay bird will come from). They present the shooter with 5 targets at each station, first a single bird followed by two pairs. Pairs can be "report pairs," in which we will launch the second bird after the shooter fires at the first; or "true pairs" when both birds launch at the same time. After shooting at the 5 birds on the menu at that station, the shooter proceeds to the next stand, where they find a new menu of 5 targets

From approximately May through September we offer regular weekly shoots every Wednesday evening from 4pm to dusk, all are welcome to participate in a fun, challenging, sporting activity. The club provides clay targets at a reasonable fixed price. Wednesday shoots often feature a light meal at $5.

The OFCL (Old Fellows Clays League) shoots daytime in the off-season (September through April) from 10 am to 3 pm every Wednesday. Don’t let the name fool you, these shoots are open to all club members and genders.

We give new shooters instruction & guidance as required until their confidence grows to regularly participate. Check the Club’s calendar for additional sporting clay events.

Because the sport is popular with a wide variety of shotgun enthusiasts, the shotguns used do not fit an exact standard. Generally, 12 gauge shotguns are used for sporting clays although smaller gauges are allowed. The most popular shotgun configurations are over-under and semi-autos using cartridge shot sizes of 9, 8, or 7.5.  Shot sizes larger than 7.5 are not allowed at the club.

Safety is an important part of sporting clays.

Our club has multiple stations laid out in a natural setting on a trail through the woods. We have many automated launchers including a new RTC (rabbit, teal, chandelle) plus several mechanical launchers operated from stands on our course. The course varies from open including a bog land stand to one that is heavily treed. Stations are also set up on the trap field using a wobble trap launcher. 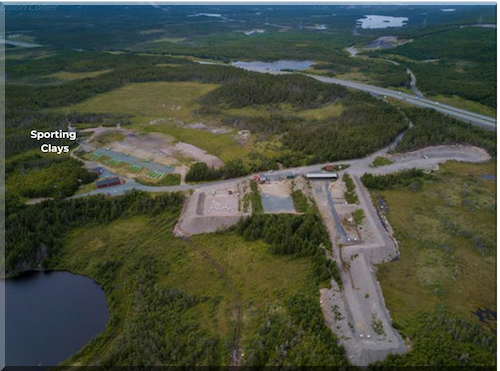 A typical course consists 6 or 10-15 stations, with each station presenting clay targets launched from trap machines. Usually 5 to 10 clay targets are shot at each station by a squad of up to six shooters for a total outing of 50 to 100 targets per person. Clay targets are thrown as singles and pairs. A pair of targets may be thrown as a true pair (or sim pair, thrown at the same time), as a following pair (thrown sequentially), or on report (the second clay launched on the report of the shooter’s gun). Shooters move from one station to the next to complete the course. Each "station" presents shooters with a different shot. At a "grouse station," for example, shooters might face flushing "birds" that zip in and out of the trees. At a "decoying duck" station, incoming targets may float in toward the shooter.

Numerous hunting conditions can be simulated by combining various speeds and angles with different types of clay targets. Each station is unique. Throughout a course, the shooters might see targets crossing from either side, coming inward, going outward, flying straight up, rolling on the ground, arcing high in the air, or thrown from towers. The target presentations are limited only by safety considerations, the terrain, and the imagination of the course designer. The configuration of the stations is often changed to maintain interest for the shooters and for environmental preservation of the course.